This year I have arranged to visit all five of our local primary schools to deliver iPad workshops on how St Cyres School uses Apple technology in the classroom.

There are many different iPad apps I use for learning at St Cyres but one of the most basic and most powerful is the inbuilt camera app. Having a one-to-one device with an onboard video camera allows pupils to create engaging project work, evidence their work, assess and feedback in a very engaging way whilst developing many skills.

During my visit to Dinas Powys Primary, I spent time with two Year 5 classes learning about the creation and sharing of video on social media. We discussed how creating videos using YouTube is becoming the norm and a form of media that is competing with television and radio.

I set the pupils a task to create a video about themselves which is known as vlog (video blog). They each chose a topic that they would like to vlog about such as their family, pet or hobby. We also discussed and identified different structures to vlogs.

Year 5 pupils filming themselves on the iPad

The pupils were all highly engaged and excited about creating their vlogs as a lot of them follow daily vloggers on YouTube and some even have their own channels. They were able to use break out areas to give themselves space to film without disturbing each other.

A Year 5 pupil vlogging about his hobby

After the pupils had filmed themselves talking to the iPad cameras, we then spent time watching the raw footage via AirPlay. We peer assessed each other’s videos, identifying what went well and how it could be improved. We also discussed the next stage of vlog creation which would be to edit the footage, add music, titles and pictures to bring them to life. 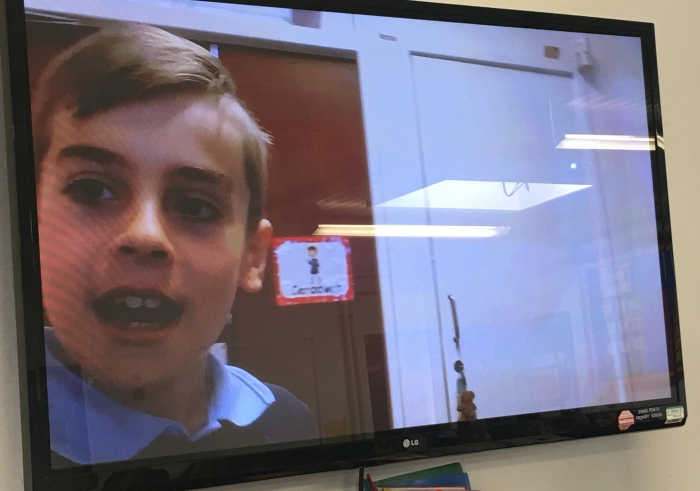 AirPlaying the footage to the class

At the end of the workshop, we went outside to fly St Cyres’ video drone. Not many pupils have ever seen a high-quality drone before so they were all very excited and engaged. They were especially excited to see the final edited video which you can watch here – Dinas Powys Primary filmed by drone

You can also read about my visit to Llandough Primary School by clicking here.